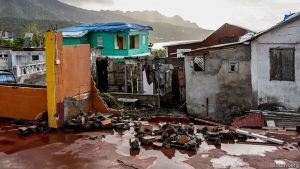 Dominica is an island in the Caribbean Sea, located about halfway between the French islands of Guadeloupe and Martinique. Known as “The Nature Island of the Caribbean,” Dominica is an unspoiled paradise for divers, hikers, and naturalists.

Last September, Hurricane Maria hammered this unique and popular tourist spot. Post-storm reports told of extensive damage. A majority of the buildings in the country lost their roofs. Power was cut with lines rendered irreparable. Some of the destruction came from the island’s abundant waterways which flooded, causing landslides and washing away major sections of roads and trails.

A month after the hurricane hit, I flew there from Toronto and found that eighty percent of Dominica still had no electrical power. The disaster was so severe that many had lost everything they had. Although they received some help from neighboring islands, it was far from enough. 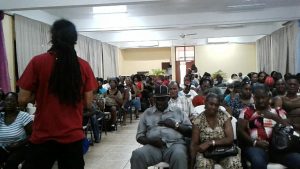 After seeing the devastation, I made a commitment to go to back every three months to help the people in two ways: to bring equipment such as water filters, solar lamps, fishing equipment, and more; and to empower the people with practical techniques that I learned from Master Sha to become happier and healthier, as well as Chinese medicine self-healing techniques like acupressure.

In four trips, I helped approximately 600 people that did not have access to medical care. I had the opportunity to offer group healing blessings to children, seniors, first nation people, and more.

On one visit, I brought water filters that could produce up to 18,000 liters of clean water. I visited four schools and taught some of the children a technique to calm their mind and increase their intelligence that I learned from Master Sha.

I also offered group healing blessings to the children and teachers at St Lukes Primary School to help release the trauma from the hurricane and restore inner peace.

It is such a pleasure to travel the world and bring love, peace and harmony to those in need!